Soul rum liqueurs are the result of rather clever idea from a group of friends who love their rum. They spotted that the rum industry is growing into something much like the gin industry, with discerning drinkers looking to try different rums, understanding the complexity of flavour, along with a historical story or two.

They also spotted the growing trend in gin liqueurs in recent years. The boom in gin liqueurs has created a huge industry, with an equally large variety of different flavoured liqueurs appealing to a vast number of consumers, some of which don’t normally drink gin, but have found the liqueurs to be a nice stepping stone before getting into the harder stuff and sometimes just enough on its own.

Well then, isn’t about time for rum liqueurs? Something a little gentler on the palate, a little bit sweeter and something that can be sipped over ice? Something pleasant and tasty for those that find the heavy hit of straight rum a little too much. Well, look no further than Soul. Aimed at those that like their drink a little softer, with an image of a lioness on the label for strength and a name as deep as it gets, it’s a well thought out and well-made little drink. The guys that thought it up don’t own a distillery so they worked with a third party distillery to create the liqueur and were heavily involved in constructing the flavour profile and tastings to hone the spirit. A little birdy tells me that there may be some other varieties on the way too.

Soul Passion is a wonderful, rum punch kind of drink with mango, pineapple and passionfruit. It’s beautifully sweet and fruity on its own. It perks up fresh juice, predominantly pineapple or mango but it would work in orange to keep it simple. You could also splash some into some lemonade or soda water, and it would be fab in prosecco. It also lends itself ever so well to tiki cocktail recipes, already nursing those vibrant key flavours. With summer coming, it would be great to freeze some in sorbets or dribble over ice cream to make your own boozy Solero style desert. It’s a delicious and incredibly versatile libation. 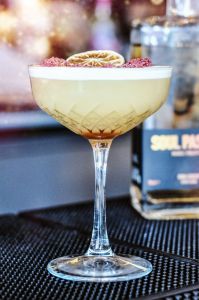 How To Make A Soul Passion Cocktail:

Soul Salty is something entirely different. Flavoured with Salted Caramel, it is absolutely divine on the rocks! Rich sweetness twists with the tingle of salt and velvet caramel flavours all melding together in a beautiful fashion. How to drink it? If you’re a fan of White Russians, try replacing the Kaluha for this and you are in for a tasty treat indeed. As far as I’m concerned you can’t beat it on it’s own, or slipping it into a hot chocolate. Keep it simple and add a 25ml measure to your favourite chocolate, or if you really want to go to town then build the hot chocolate into a freakshake with all the trimmings. 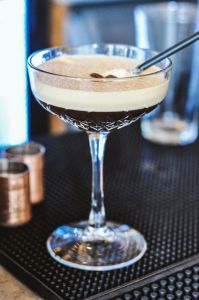 How To Make A Salted Caramel Espresso Rumtini:

I’ve got a friend who doesn’t drink very much. She finds the taste of straight spirits far too much and she’s got quite the sweet tooth. I suggested she try a little bit of the Soul Salty when she came to visit recently, and she loved it! I had to tear the bottle away from her in order to finish this write up. Soul is definitely a great starting point for people wanting to get into rum, whilst not having a palate for so much of the heavier stuff. They’re beautiful drinks and I predict they’ll be opening the door to the rum world for many a drinker indeed.