We are nearly at the end of January! Whether you’re doing Veganuary, started at a gym, or even just holding out until payday, you’re nearly there!

And hey, when it comes to the ‘new year, new me’ change of habit, if there has been a slip here and there, don’t punish yourself too much. By all means, absolute winner to do the entire month, but it’s also about your frame of mind. I spent the latter part of last year as a ‘flexitarian’, mostly veg but if something really took my fancy, I’d eat it. Taking that option definitely meant me eating less meat than normal and I felt better in myself for it. This year, the fella and me are going Vegetarian, but if there’s a slip, that’s ok. If I eat meat, I’m not going back to just eating meat all the time, I’m carrying on bring more and more veg in and I know in the near future that’ll be it. We love to think we can make an immediate change because we want that change immediately. But give yourself a little patience if it takes a bit of time to incorporate it. Be kind to yourself while you adjust.

And that leads me on to the focus of this newsletter. Veganuary. I hope you guys appreciate the support in Dry January for the first couple of weeks, but I’m feeling it’s right to turn my eye onto those doing Veganuary and give them a little love too.

Now the good news is that most spirits are vegan. There are some obvious examples of spirits containing animal products, for example, Ant Gin. But on the whole, you’ll find that most gins and rums are vegan. So that got my thinking, cocktail recipes are kind of out. However, there are components of cocktails to be wary of. Things like egg white for example, that has been commonly used in Sours amongst others for well over a century. Its main purpose is to give the cocktail a thicker, creamier consistency and a foamy top without altering the flavour of the drink itself. Vegan alternatives to this can be a little tricky, so it’s worth trying and testing to see what ones work for you. A common alternative is chickpea water, otherwise known as Aquafaba, which is often drained from a can and then thrown away. This makes a great alternative, but does alter the flavour, so think about what you’re putting it with. Another great thing you can do with chickpea water is whisk it up with sugar and add some melted chocolate, to create an amazing vegan chocolate mousse. Why not slip a little rum or whisky in there to make it pop? I’d suggest adding it to the melted chocolate before folding it in, so you don’t lose the fluffiness.

And this leads me nicely onto a couple of vegan recipes. A little while ago, I shared recipes for Gin and Tonic Cake and Chocolate Rum Cake. So, I thought I’d hunt out a coupe of vegan alternatives. Yes, you can have your cake and eat it! 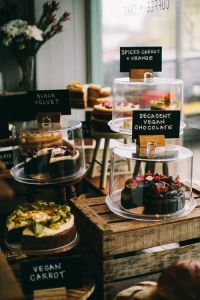 Firstly, the Gin and Tonic cake. This cake has become a staple of the gin world. Online you can find hundreds of variations. This one from BBC food took my fancy. It looks absolutely gorgeous! Let me know how it turns out:

Secondly, for those chocoholics out there, you just can’t beat rum and chocolate. What a tremendous duo! I’ve found this great little recipe from Onegreenplanet.org. And my, it’s not just chocolate, this is a Chocolate Coconut Rum cake. Ooderlally!

So, I hope this has been a nice little issue for you. Do let me know how you get on and if you’ve got any vegan friendly boozy recipes to share, drop them my way! Bernadette@ginandrumfestival.com

Have a great week you lovely lot. And remember, you’re nearly there! Next week we celebrate the last day of January.