And how are we doing this week? Still looking out for each other and hasn’t the weather been so beautiful?

What with all this sun, I wanted to continue on from last week with the idea of sunshine drinks. Now, I don’t know about you, but one of the ultimate sunshine drinks for me is a Tiki Cocktail. Tiki Cocktails are amazing! I’ve been lucky enough to visit a specialist Tiki Bar in San Francisco called Voodoo Village and their cocktails are next level. So, without further delay, pour yourself a drink and get yourselves comfortable for a little bit of Tiki history, followed by recipes for some of the stars of the show and some suitable rums for the job. 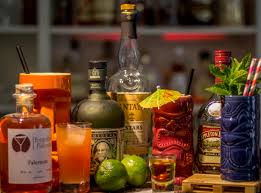 The History dates back to Polynesia, in the South Pacific. The word Tiki, is the name of the first man created in Maori mythology. Carved wooden statues representing Gods inspire the ‘typical serve’ ceramic cups found in Tiki Bars, apparently stemming from one of the first, a bar called Donn the Beachcomber, in Hollywood, California, opened by a chap called Donn Beach in the 1930s. Inspired by his travels, he began recreating the flavours he experienced with rum and fruit like pineapple and guava. 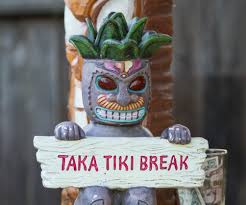 The next important development is the invention of the Mai Tai, renowned king of the Tiki cocktails. There is more than one story as to its invention (often the way with drinks), but a common story is that the Maitai was invented in the 1940 by a man called Victor Jules Bergeron, or ‘Trader Vic’ as he’s now known, and rival of Don Beach. Vic tested his recipe (pineapple juice, orange curacao liqueur, light rum and dark rum) on a couple of friends from Tahiti, to which one exclaimed “Mai tai-roa ae” or “Out of this world – The best”. This is supposedly where the drink gets its name. 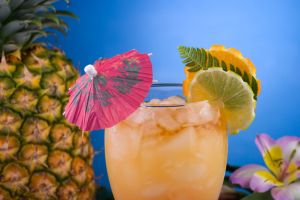 Tiki Bars found another surge in popularity during the 1950’s when air travel from the US to Hawaii became more common. Tiki Bars are still popular on the West Coast of the US, although I’d say we do need a few more of them here in the UK, although the Mai Tai has found its way onto the menu of many bars.

I’m thirsty now. Let’s whip up some cocktails, starting with the Mai Tai. For this I refer you to Difford’s Guide which has the original Trader Vic recipe, along with the story.

Next up, one of my favourites, the Zombie. The Zombie actually a creation of Donn Beaches. The Zombie is pretty simple in concept. All the rums and all the fruits! Most people make them in different ways, but often you’ll see light, anejo and dark rums in the mix. They pack a powerful punch and are definitely a drink to drink responsibly. Here you have a handy link that gives you three different recipes of this cocktail.

Final, another classic, the Hurricane. The Hurricane is top draw delicious and often served in a rather generous glass based on the design of the hurricane lamp. Created in New Orleans at Pat O’Briens Bar during WW2, when there was a lack of whisk. The drink is super fruit with orange, passionfruit and lime. Here is a great little recipe from Liqour.com

And as always, some recommendations of suitable rums from our shop to help you create some real Tiki masterpieces. Considering the recipes, I thought it best to suggest a light, a dark and something inbetween.

El Dorado 12-Year-Old: Awards the gold medal at the Caribbean Rum Taste Test (hld annually in London) no fewer than seven times in the first ten years that the competition was held. A good base for any cocktail. Buy it here 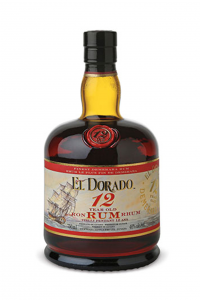 Old J Tiki Fire Spiced Rum: The clue is in the name, right? A blast of vanilla and lime. Perfect served on it’s own over ice with a couple of fresh lime wedges or served with your favourite mixer, this will knock your socks up. Exactly what you need to give you cocktail some extra oomph. Buy it here

Unconventional Distillery Original White: They use a 12 plate reflux still rather than a traditional pot to create a smooth, clean and flavourful spirit. Using white oak barrels, they get flavours of caramel vanilla, cream and almond. Just what you need for smoothing that cocktail into something delicious. Buy it here 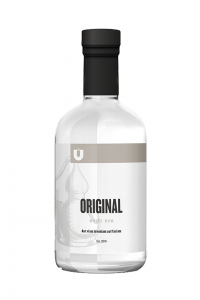 Ta-da! I’m super excited for you guys! The world of Tiki cocktails is a bright and beautiful place. Enjoy!